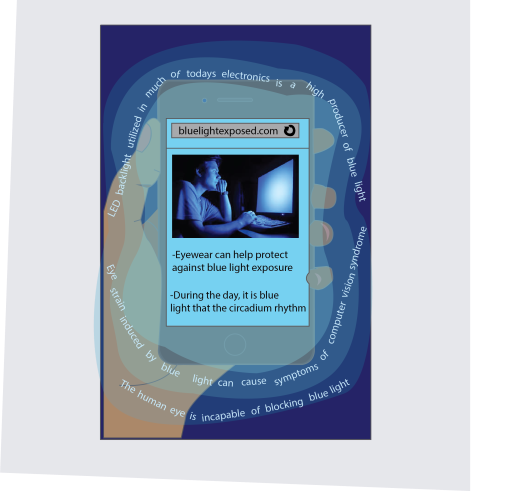 Technology continues to develop into an integral part of society, but with it comes the increased exposure to blue-light.

Blue-light is an electromagnetic particle wavelength in the visible light spectrum. This spectrum is sensitive to the human eye, represented by the colors violet, blue, red, orange, indigo, yellow and green. Each wave emits energy and blue-light has the shortest wavelength making it one of the highest energy producers.

Much of the blue light exposed to people comes naturally, either from the sun or artificially from digital screens such as phones and computer screens, according to bluelightexposed.com. The concern with blue light stems from the negative health effects caused by the exposure to it.

According to truebluelens.com, prolonged exposure has been associated with sleep deprivation, which can lead to cancer, diabetes and even obesity. Headaches, strained eyes and the suppressed production of melatonin, the hormone that maintains a person’s circadian rhythms (the physical, mental and behavioral patterns that follow a 24 hour-cycle) are also some side effects to the exposure.

Blue light is also linked to macular degeneration, which occurs with the loss of light-sensitive cells in the retina of the eye, which can lead to vision loss, according to allaboutvision.com.

No definitive protection from blue-light is known, but tools such as red lights, which yields less energy than blue-light, and Apple’s Night Shift function on iPhones and f.lux, which adjusts the brightness of the screen to adapt to the time of day, can reduce blue-light exposure.

Despite the drawbacks to blue-light, benefits to safe amounts of natural blue-light include greater attention, elevated moods and even improved reaction times, according to health.harvard.edu.

Acne, wrinkles and rosacea, a skin condition that causes redness and pus-filled bumps, are also conditions for which, in some cases, bluelight therapy can be used as a form of treatment, according to livestrong.com. Seasonal affective disorder (S.A.D), a type of depression due to a lack of sunlight, can also be treated with bluelight therapy.

Blue light can provide substantial health benefits, but it can also cause detrimental reactions in the body. Though there are preventable measures against these effects, it is important to be aware of the risks and advantages of its use.