Harriers on track for prelims

Hoping to repeat their league championship title, the harriers will compete at League Finals on Nov. 3.

Girls varsity lost to the Alhambra Moors with a final score of 39-42. Boys frosh-soph took second to the Bell Gardens Lancers with a score of 42-58. The top five runners’ points of each level were added in the end to give the final score for each school and the team with the lowest score winning. 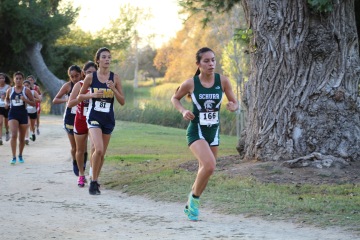 “We’ve been working pretty hard, especially since Alhambra has been on our tail and is our biggest competitor,” said senior Susan Gonzalez. “I lost by a second to the Alhambra girl, which caused them to get first. For the final league meet, I have to push even harder so that it doesn’t happen again.”

“We have some new people that have really stepped up in varsity, which gave the seniors a challenge,” said senior Andres Cazares-Dominguez. “It really made our varsity team a lot stronger than what it already was. I’m expecting that we will win league finals because we have a strong team.”

The harriers competed at the Santa Clarita Invitational at Castaic Lake Oct. 8 and placed third for JV boys.