Kicking off their first performance of the year, choir students will perform their Fall Concert Sept. 30 at 7 p.m. in the auditorium.

Students auditioned for solos and were able to choose songs they wanted to sing using a recorded accompaniment of the song. The concert will include duets, solos and performances

by Beginning Choir and Vocal Ensemble. Admission is $5 at the door on the day of the concert. 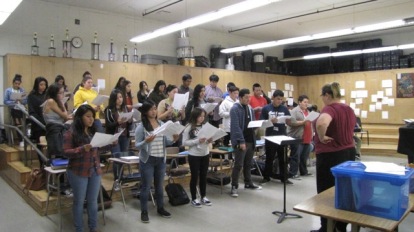 “It is probably the most fun concert of the year just because students are singing [their] songs,” said Angela Chong, choir teacher. “With this concert, it gets people used to singing choir music. It is usually not terribly difficult, especially this year. I picked songs that will be fairly easy to catch on to.”

“I kind of think of [the concert] as a karaoke concert, but with more preparation,” said Chong. “It is not just people picking a song.”

Practice began after school started and students underwent voice checks with Chong. The voice checks consist of a small student audition and feedback from Chong on their vocal range as well as discussions about their singing experiences.

“I am preparing my solo by singing over and over in my head as well as out loud to myself,” said Melinda Chin, senior. “Also some minor ways that I prepare for my solo are humming, watching instrumental lyric videos and sing the song over until I am tired of it.”